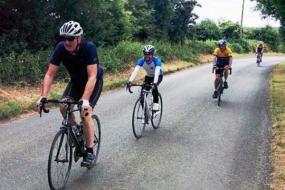 Ten riders started and finished the full ride to Buntingford and back.  Franco started but only lasted half an hour as he needed to pull up his kitchen flooring and organise a barbecue - grilled tiles, yumeee! We were later joined by Gareth who, tired of his solo plod at 11 mph, joined us for the category six 12 mph. Tea room welcoming and efficient. A brisk ride back ensued so that all could watch Vettel v Hamilton or Federer v Cilic, or have a nice snooze like me. 35 miles.

A good-sized group of twelve set out on this ride, which had to try to make a trip via Church Farm Café at Ardeley last for sixty miles. The result was a route which started out in apparently the wrong direction before turning back, appearing to head for home then veering off to Ardeley. This meant we were heading South through Buntingford after 23 miles in time to hail the Cat 6 crew stopping for refreshment at the coffee shop (tempting, but we still had eight and a half miles to go). Richard Furness suffered a pothole puncture about three miles before the café and being unsure about the reliability of the tyre took the direct route home from the café. On the return from Ardeley a number of feints were made in the direction of Ware, but then we wouldn’t have made the miles would we? so sharp turn and look for a hill to take the mind off things. Yes, sorry about the hills guys, it was a bit of a “rolling” route with never a lot of flat before the next ascent - oh and the inclusion of Sacombe Hill, which came after 52 miles, oops sorry about that… (we all made it to the top though, even John Highet, in his lowest gear and fighting wheelspin - well done!). With the traditional peeling off by riders as we got to convenient points for home there were six of us left to trundle up the hill out of Barwick Ford before the final run through Cold Christmas and back to Ware. 63 miles in very pleasant weather so, apart from the one puncture, a good day out.