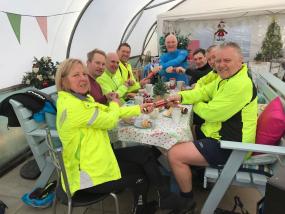 After a quick inspection of the car and driveway at 07.30, both seemed wet but ice free, so after the normal cycling breakfast I donned the kit and off I went just after 9.00! Some parked cars along the way seemed covered in ice and others didn’t, but the roads appeared OK, although caution was definitely the way forward. The five riders set off from Ware in the four hour sunshine window which I organised the previous day, heading for Flint Cross near Royston.

Cycling through Wareside, the roads seemed wet rather than icy, but we had decided on a slow pace just in case. We rode through Much and Little Hadham, sticking to the main roads until Stocking Pelham and then up through Meesden, Langley, Duddenhoe End to Great Chishill and then down hill for about 2 miles before turning onto the B1368 and into the cafe. The food was glorious, 4 of the 5 had protein in the way of eggs, bacon and sausages (all from the farm animals) and 1 had a scone (you know who you are!)

The food was served and eaten in record time, and the discussion turned to “Let’s find the fastest route back”, so we did, straight down the B1368 with a slight wind in our face and of course over the hills around Barley and Barkway.

The perfect winter ride 50 miles - a slowish pace 14.5 average mph in the sun with great food and company!

Today's cat 5 club run proved to have rather variable numbers. We started out with 8, soon lost 1 due to an icy road, then lost another through a defection to the cat 6 mob, although we saw her again when she needed her tyre pumping up. Finally nearer to Hitchin we lost a 3rd member when he decided to go home for an early bath. A rather circuitous outward route, through Bramfield, Datchworth, Aston, Walkern, Halls Green, Graveley, Great Wymondley to the Four Leaf Clover in Hitchin. The expectation was to find the café full of Christmas punters but there was plenty of room for our group of 5 and we were efficiently fed and watered. Our return leg through Charlton featured a special Christmas treat, namely the 1 in 7 climb by Offleyholes Farm up to Preston. Then on through Hitch Wood, Rusling End, Nup End, Oaklands, Bulls Green back to Hertford. 42 miles, no punctures, mechanicals or tumbles.

Nine intrepid Wheelers set out from Hartham on a quest for the holy grail, the Mill End Bakewell tart! One deflated Wheeler had vanished not more than 15 mins into the ride, but was quickly scooped up by the cat 5 who seemed to be following us from a safe distance. Back up to 9 strong, we soon made up for lost time by then drafting the Cat 5 peloton who were heading the same way.

A very warm welcome awaited us at Mill End, Christmas crackers laid out on our reserved table and a free mince pie each! The cakes were as delicious as ever. On leaving one Wheeler forgot he had a Christmas hat on as he put on his helmet, but alas, our laughter soon turned into concern once we discovered not just a broken spoke but also a missing section of hub which the spoke fits into! Amongst the sponge cakes, a roll of helicopter tape just happened to be on hand in the tea room, which did the job. Confident of a sterling repair, we headed off, but 5 miles later another spoke went ping! The wheel was giving up! This time we used surgical tape from a first aid kit. After a few more miles the wheel was wobbling so much the rider thought he was on the Paris Roubaix cobbles, but he ploughed on before turning off for a short cut home (which may have actually been longer now I think about it, oops my advice!). I’m sure he made it back..

Fun ride as usual, thanks guys