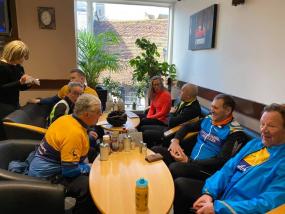 Six riders turned up at Allenbury’s, Ware for the 9.30 start to the Silver Ball Cafe in Reed. Well, that was until we rounded several bends and I heard shouts of “We’ve picked up another rider”! Steve G made it in the nick of time and he was able to catch us due to the road works at Park Road near the roundabout. We were soon on our way again through Wareside, reaching the B1004 (Widford Road) was where we encountered our first “Road Pond” after careful navigation through the puddle we rode through Much Hadham and turned left up Bromley Lane where we encountered a “Road Waterfall”! We now headed northbound, bypassing Braughing, turning right to do a few squiggles through the country lanes where the leader got a front wheel puncture. This was repaired in a flash due to his high skill level! A few more squiggles brought us to The Silver Spoon in Reed. Here we met our guest rider, who was basking in the winter sunshine!

After very fast service and reasonably priced food and beverages we were on our way again, through Sandon, Rushden and Cromer, turning right towards Ardeley and Haultwick and home once White Hill had been negotiated; I didn’t tell them about that one! 51 miles at a moderate pace of 14.5 mph, probably due to the 3000+ feet of climbing, and puddles, puddles everywhere. As always great company, team!

Five Wheelers set out from Ware with the benefit of a tailwind for our regular ride to Buntingford. All progressed well until the approach to Much Hadham where some moron driving an ancient Land Rover at high speed tried to run us off the road on the twisting decent of Kettle Green Road. The incident was sufficiently dangerous that a report has been submitted to the police. Shortly afterwards at the north end of Much Hadham the puncture crew had to be called on to repair a soggy back tyre. A little further on at Little Hadham, the back tyre was once more soggy and an inspection of the offending article indicated that it was well past its best. At this point it was decided that International Rescue had to be called in to effect a recovery of rider and bike. The remaining quartet continued through the Pelhams, Meesden and Anstey to Buntingford coffee shop. Due to our later than planned arrival the usual mid morning rush had passed through and there was an abundance of tables and chairs to choose from. Return into the wind through Aspenden, Cherry Green, Colliers End, Latchford, Barwick Ford back to Ware, fortunately without further incident. 42 miles.

The potential end of capitalism was averted by Friday morning, meaning the eight category 6 riders could enjoy a half way stop, and not face a sign at Mocha Cafe, Bishops Stortford, saying “ Closed due to impending nationalisation”. Once again the ride numbers were not prime - oh for a seven, eleven or thirteen. Just three more would have done, three guests with time on their hands. Jo Swinson, maybe! Dennis Skinner? Lord Buckethead?

The route aimed to swerve the recently created lakes on the Hertford/ Essex borders, and succeeded for the most part. Instead flints were the gremlins, latching on to one particular tyre on three separate occasions. That is bad luck.

Out via the Hadhams and Farnham. Cafe Mocha did the biz splendidly. Back via Gaston Green and Sawbridgeworth. 35 miles.