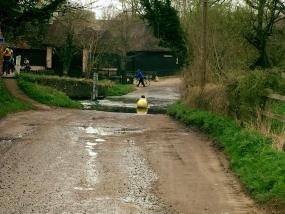 As our club 'captain' is a little off colour at the moment, and felt he would rather not lead today's ride, it was left to the two deputies to decide between them who had the honour of taking over. As Mike didn't have his map with him, it was decide it better be me to take the reins. Bob was going to make his own way the café and meet up with us there for coffee and cake. This left the other 15 of us (very good turnout today) to crack on out through the Hadhams towards the Pelhams and then loop back to Puckeridge. The decent weather and athletic abilities of the peloton meant that the pace was well up to cat six standards. We arrived at the café at more or less the time expected, and as captain Bob had phoned ahead to warn of the numbers, coming found enough reserved seats for everyone. Our numbers were reduced by a few for the return leg of the journey which was only about 9 miles. Bob decided to ride back with us and we headed back towards Barwick Ford. This could have been a bit of a problem for John and his yellow velo machine but not in the slightest. The yellow submarine ploughed through the water as if it was built for it. Well I guess submarines are, aren't they!. Nice to see you back out again though, John.
Through Cold Christmas and then onto the old A10 back into Ware for a shade, well 3 miles, less than advertised distance. Apparently one member was a bit unhappy about this and was thinking of writing a complaint. He asked where it should directed and changed his mind when he was told what he should do with it.
Nice to see such a big group out today, especially those who have not been out much lately.

A misunderstanding led to the cat 3 hopefuls turning up at Hartham Common to find there was no leader. Luckily there had been a suspicion this might happen and yours truly had downloaded an old ride route late on Saturday and this was pressed into service. Which explains how seven of us set out for the Dunstable Downs Visitor Centre on a pleasant Sunday morning. Rolling out through Bramfield, Woolmer Green and Codicote we headed down to Wheathampstead then turning for Redbourn, Gaddesden Row and skirting Whipsnade before flogging ourselves up the final climb to the top of the Downs.

A basically “up” route profile on the way out meant a basically “down” profile on the way back, but there was also the wind to reckon with, which was more troublesome than before. Back through Markyate, Peter’s Green and Kimpton, then Welwyn and the B1000 back to Hertford with the leader’s lack of fitness finally showing three miles out and having well and truly hit the wall he was nursed back to Hertford. Apart from a few spots of rain that never developed into even a light shower, we had good weather throughout the 55 miles (occasionally even spotting our shadows on the road!). Has spring finally arrived?