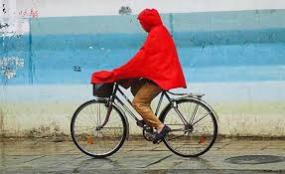 It was stotting down at Allenbury’s before 9.30, and the forecast for later was poor. The ride leader was unimpressed and cancelled the ride, leaving a couple of keen aquaplaners to take their chances on some form of category 2/3 ride.

You had to be wearing the right clothes…

Another attempt at a mixed Cat 2 and 3 ride was stymied by the weather  -  in conditions that were “bad, forecast to become torrential” nine committed (maybe they should have been!) club members turned up at Allenbury’s.  After discussions, as mentioned above, the Cat 6 leader and deputy who had turned up out of a sense of duty decided not to endure the suffering and called off the ride, the two Cat 5 riders decided that while riding on the road was very silly, the MTB ride they were planning was certifiable lunacy and also headed home.  That left four who had planned to ride Cat 3 plus Paul H who was persuaded this was the time to try the move from Cat 6 to Cat 3.  Even so there was uncertainty and we stood under the trees for a while debating the sense of it all but the rain eased a little and we decided to make a start and cut it short if things turned biblical (“when the fun stops, stop” as they say).

However things did improve, with the rain varying between “steady” and “light” but never “torrential”.  Despite occasionally having to ford road-wide flooding we make good enough progress towards the café that the idea to cut things short receded and we pressed on to Shenley by which time it was drizzling and a bearable temperature.  As a result we arrived with the only mishap being Graham suffering the obligatory wet-weather puncture in Hoddesdon.  The Café in the Orchard was packed and warned us of a 20-minute wait but then excelled themselves in clearing tables as people left and we had seats in less than ten minutes and food very quickly after that.  While we were eating we noticed that the rain had indeed turned torrential and the conversation  turned to the availability of Uber taxis, but by the time we were ready to leave the downpour had passed on and we were back to lighter rain, which accompanied us for the rest of the return journey. Despite the route profile showing the outward leg being hillier tiring legs and headwinds on the return combined with some short-sharp climbs made everyone pleased when the 48 miles of fun was over and we rolled into Allenbury’scar park to wring out the bikes and head for home.  Doubtless if you were not there you are going to have to endure stories of fortitude and derring-do from those of us who were  -  sorry about that but doubtless the chance to take part in some sub-aqua cycling will arise again and you can pull on the Shimano wellies and join in the fun!