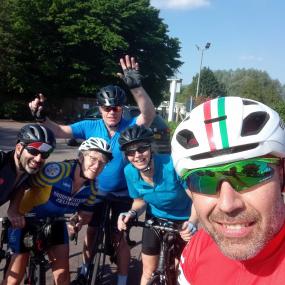 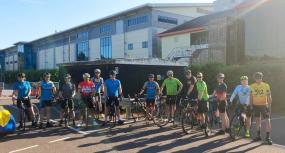 Great ride today on a tweaked version of the HW Centenary Ride.

It was an earlier start than usual in an effort to beat the heat that was forecast – the Garmin recorded temperatures from 15c to 45c.
The ride was steady, with a drink stop at Saffron Walden, a lunch stop at Finchingfield and a pub stop at Stanstead Abbotts.

Apart from a rubbing disc and two punctures there were no other mechanical issues.

19 started and 19 finished. For many this was their first century ride so congratulations are in order! Average speeds ranged from 12 mph to 18 mph from which you can judge that we didn't all stay in one group. Here are some reflections on the day.

Within a few miles of leaving Ware, just outside Rushden, a velomobile and five cyclists suddenly found themselves without the rest of the group. After a quick phone call back to Graham we agreed to carry on and hope the group behind us would fix the puncture currently holding them up and catch us up. We cycled on to Saffron Walden and had our first café stop. Discussion mainly centred around where the light switch for the toilet was inside the café!!?? After causing complete confusion to the town's traffic, with everyone’s Garmins telling us a different direction, we set off again to Finchingfield.

Arriving at our next café stop we met two Cat 3er’s who were just leaving, so John set off with them and the remaining five of us found what shade we could and sat on the pavement with several ducks for company. Kate and I tried to blag our way into a very nice looking pub in order to use the toilets but got thrown out just two steps in. We weren’t even drunk and disorderly!

From then on it was a case of heads down and get the miles in. Luckily we had Enzo to record every moment on camera with lots of selfies en route, he even took a photo of his odd socks which he claims are supposed to be worn like that??

We averaged 13.6mph and were back to Glaxo by 5.30 pm. This is where the only disaster of our little group's ride occurred. We couldn’t get into the bar to get a drink.

Really enjoyable ride, with 4/5 of us recording our first ever 100.  Great company and team spirit, so thanks to Kate, Elio, Enzo and Mike for making it a very memorable 100.

From Richard and Brian

We formed an early breakaway on Ware High Street that nearly ended in disaster as a car almost took Richard out on the roundabout. The faster Buckingham group rode past at this point. We caught them up again at Cumberlow Green as they took a comfort break and rode with them to Reed, joined briefly by Nathan Brede's group. We had a good stop at Bicicletta (avocado toast with poached egg on top) seeing the faster (Cat 3?) group ride by just as we were finishing up.

Nice ride into Essex with a brief stop at 55 miles shortly after going by a biker accident. Good run to Finchingfield for cream tea and scone on the green. Saw the Cat 2's leave Finchingfield and Enzo et al. arrived just before we left. Refreshed we set off on the last 33 miles. We both start to fade in the heat and Brian's knee began to play up but we got home before 5 pm.

Good day in the glorious sun! Luckily the Netherlands match was exciting otherwise I would have fallen asleep earlier.

Seven of us became detached early on when we had our first puncture near Rushden. We then made steady progress to Shaftenhoe End when our detachment was confirmed by a second puncture. Once that was fixed we stormed up to Chishill and enjoyed the long descent towards Saffron Walden. Somewhere around here Tony impressed himself by overtaking Barry. OK, it was down-hill but again, he was maintaining a running commentary at the same time. Barry left us in Saffron Walden claiming an afternoon BBQ engagement. The rest refuelled in the The Mocha café, which was surprisingly empty so service was quick.

This was the first century ride for most and the heat and rolling Essex countryside was inducing fatigue. We stopped to take on water (and in Tony's case nicotine) in Toppesfield then continued our weary way to Finchingfield - not helped by Graham adding two miles by misdirecting us up a tiny lane to a house guarded by an angry labrador. The café in Finchingfield provided cake, sandwiches, coffee and a pretty view which did much revive spirits if not legs.

The countryside continued to roll taking a particularly stressful upwards roll after Debden. Consequently we made another stop in Newport for water and a rest in the shade. Ian's rear tyre accomplished a sneaky deflation while we were resting so we had a bit more time in the shade while he fixed it. All should be commended for not heading up the road to Newport station at this point. Instead, we forged ahead via increasingly familiar roads making it back to Ware in time for a well-deserved evening meal. Well done Davina, Grace, Matt, Ian and Tony!