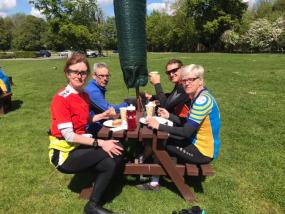 ***STOP THE PRESS - DOS SANTOS LOSES 6 RIDERS***
Well this was a ride and a half. First half of the ride went well, except when Peter Eldon decided to have a puncture. Peter was trying to be a martyr by telling us all to go on, whilst he fixes the puncture. No one gets left behind on my watch! We helped poor old Peter fix the puncture as he was all thumbs, and we went on our merry way. All went well. We got to Thremhall Park, the service was a little slow, but the food was lovely as ever.
On the way back everything was going well. Then disaster! I let six riders go on as I was waiting for Claire, Robyn and Kate. I waited and waited and waited. So I decided to go back about half a mile and there they were having a picnic! Ok, not a picnic; Robyn had a puncture and she was all thumbs and no fingers, just like Mr Eldon. So we set about fixing the puncture and continued our merry way. Mike East tried to call me and I tried to call Mike, and though we never got to speak to each other, I knew the other six were in good hands. So us four set off and we all decided to take the shorter route back. So I, erm, took a turn that I thought was quicker and, erm, it was about 3 miles longer.
We eventually found our way back, and all was well.
It’s nice to have two new riders coming along. A big warm welcome to Claire Watson and Lynn Nicholls. Love and kisses Tony.