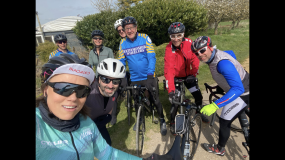 It was great to see three new Wheelers for today’s ride to Tapps Garden centre in Baldock with Will Bowen, Karl Desouza and Nicolette Bosch joining the cat 4s for the first time. A cold start, but the forecast was dry and sunny, so Elio Domenicano took the brave decision to put the rest of the team to shame and don the shorts!

Things got off to the usual chaotic start as Andy Manning led his followers up Port Hill rather than down Port Vale in his quest to find a short cut to the Bramfield Road. Fortunately, Will raised the alarm and we managed to retrieve the lost souls and keep the gang together for the remaining 99% of the ride.

After a brief detour via Datchworth, including the road through Bramfield that was a good test for everyone’s dentures, the route followed a due north and direct course from Watton-at-Stone to Ashwell-in-Morden, with a brief “snack time” stop on the streets of Walkern for Lisa Ridoutt and Nicolette to crack open those healthy chocolate bars! Enzo Misuraco went for the gold medal on the stretch from Mill End to the A505, whilst Karl and Andy fought it out on their go-faster summer bikes on each and every hill.

Tapps Garden Centre offered its usual variety of drinks, sandwiches and cakes. There are multiple English breakfasts listed on the boards, but unfortunately, they all come as varieties of tea! A lack of eggs on offer (the chickens must be poor layers in Baldock) meant that Enzo had to act as stand-in for Peter Bloomfield and indulge in cake, before Nicolette’s soup arrived, in a bowl that could have served all eight of us sat at the table!

A steady ride back through Willian, Wymondley, Langley, Burnham Green and Tewin facing what wind there was, and we all made it back to Hertford in one piece, where Enzo was persuaded to use the legendary Hertford cycling underpass beneath Gascoigne Way. I am sure he was convinced that it was a trap, with wolves ready to pounce at the far end of the tunnel!

I did check on Strava to make sure he fought them off and had made it back to Hoddesdon unscathed.

Thanks to all participants for another enjoyable day!

The category 6 pretty young things had been at it again on the Saturday, zooming round the New Forest, searching for the remains of William Rufus. Meanwhile, on Sunday morning, some senior laggards emerged from under their stones and assembled at Allenbury’s. Two from Saturday fetched up as well.

Cammas Hall was in its second week of operation following the winter closedown. It was busy with families on their Easter trail - what was there to excite? Tables and tables of ripening strawberries, or a virtual jungle with lions, tigers and bears? We left the awestruck juniors to it and concentrated on the nosebag.

On the return leg, the group of ten split at various points, but without any news to the contrary, all made it back safely back to their stones. Well done to Rebecca and Tony for their 100+ miles over two days, and thanks to all for their company.