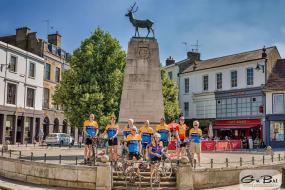 Hertfordshire Wheelers Cycling Club celebrated the 90th anniversary of its founding in July 1928 at the weekend with special club rides and a celebration lunch. The club was created when eight friends in The Blackbirds pub in Hertford decided to form a cycling club and it has been going strong ever since. The club now has 125 members and organises multiple club runs on Sundays, also Wednesday evenings in the summer as well as Time Trials in various locations around Hertford and Ware. Each year the club organises an Audax (long distance) ride for charity which regularly raises over £1000.
The club is now based at Allenbury’s Sports and Social club in Ware which is the start point for most of the club’s rides. In honour of the 90 th anniversary on Saturday some keen members undertook a ninety-mile ride out through Essex, Suffolk and Cambridgeshire turning just south of Newmarket before returning through Saffron Walden and Buntingford on the way back to Ware. On Sunday all the club’s rides took a route through Hertford where they all assembled for group photographs - replicating pictures from much earlier days. After shorter rides than usual the club members met back at Allenbury’s where a buffet lunch had been laid on, also there was a display of club photographs over the years and a collection of bicycles both recent and vintage - including both the steel-framed bike used in 1970 by club member Tim Dobson when he became the Junior National 25-mile champion and Best All Round Champion and the carbon-framed time trial machine ridden by Gareth Wignall to a new club 50-mile record this year, a record until then held by Tim Dobson since 1978.
Club Chair Marcia Carnegie said “ it is great to see so many club members here today, both old and new. The club is a great way for people around Ware and Hertford to ride with friends and the club is large enough to accommodate most abilities - we are always keen to welcome new members and I would encourage anyone who wants to join us to look at the club website for details. ”
Club President John Pearson said " I would like to express many thanks on behalf of the club to the several folk who made yesterday’s celebrations a success. There were about 50 members who took part in 4 separate rides, some long, some short, some off-road. And most of these were among the 70 members and family who attended the Allenburys Sport & Social club in Ware afterwards to enjoy a few hours of chat and reminiscence over the displays of bikes and photographs from our 90 year history. "
" The buffet provided by Hills of Stanstead Abbotts was well planned, arrived early and was well-received and the staff of Allenburys were very helpful. "
" I shall not name all of the people involved, the leaders of the rides, the folk who created the displays and all those who pitched in to help (before and during ). But a special thank-you must be given to Gareth and Bri who photographed the occasion and to Marcia Carnegie who did so much of the preparation beforehand, yet was unable to attend herself. "