All set for Wheelers' Audax Day on June 11th

All set for Wheelers' Audax Day on June 11th 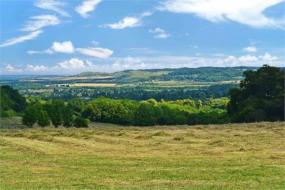 Six Herts Wheelers - Alex P, Barry P, Graham K, Ian S, Paul M and Peter W - set out to ride the 210 km Herts High Five audax route seven days in advance of the main event.
The weather at the start was bright but cooler than of late - arm warmer temperature for some. The roads were nice and quiet at 8:00 am and steady progress was made westwards towards the Chilterns. At Ringsall there was a pause for a strategic discussion and it was decided to skip the first schedule stop on the Ashridge Estate and head on to the 100 km stop at the Chilterns Gateway Centre.
The next section was the toughest - though amply compensated by glorious views. The ascent of Hastoe Hill after Tring took them to their first county high point (Hertfordshire 244 m) and shortly to their second near St Leonards (Buckinghamshire 267 m). A sharp descent took them back near Tring for a flatish ride towards Ivinghoe and Whipsnade. The climbing then began in earnest once more, first up to Studham then to the Chilterns Gateway Centre - their third county high (243 m). Despite fears at arriving at lunch time on a sunny Sunday they were served quite quickly and then set off on the 3 mile descent towards Markyate.
By now the weather had changed with increasingly grey skies. However, there was now a nice tail wind as they headed east over more familiar (though still hilly) territory through Whiltwell and Wymondley to Ardley where they made a quick coffee and cake stop at Church Farm.
After Ardeley they were down to three riders with Alex, Paul and Ian having answered the calls of home. Apart from the normal Hertfordshire lumpiness there was one more tough climb up to their fourth high point at Great Chishill (Cambridgeshire 146 m). This was followed by a long descent then a fairly gentle climb to the final county high near Langley (Essex 134 m).
After Langley they forewent the delights of the final control at the Merry Fiddler in Anstey and made good time from back to Ware, with Barry doing sterling work at the front. They arrived shortly after 6:00 pm with a moving average (according to Strava) of 14.4 mph.