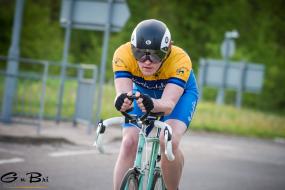 Hertfordshire Wheelers’ Time Trial League has had a troubled start to the season, the first round was run in freezing conditions, the second round had to cancelled because heavy mist on the A10 lowered visibility to dangerous levels and the latest round on the evening of Wednesday 25 April ran over a revised route because of roadworks at the roundabout leading on to the A10 at the beginning of the course.
With roadworks blocking the normal start at the A602 roundabout heading North on to the A10 at Ware the start was moved to opposite the old Sow and Pigs pub and then used the A1170 roundabout and spur to head North on the A10. The northerly turn was extended from the A120 roundabout at Puckeridge to the next roundabout before returning on the A10 and taking the A1170 turning again to finish at the entrance to Wodson Park Sports Centre. Doing all of this resulted in a race distance of eleven miles instead of the original ten.
Eight riders contested this unusual time trial, five Hertfordshire Wheelers and three from Herts Rouleurs Racing Club. On a windy evening honours were even with Karl Willis of HRRC first in a time of 24mins 32secs closely followed by Gareth Wignall for the Wheelers in 24:55.
Photos ©  GnBri Photography . More photos  here .