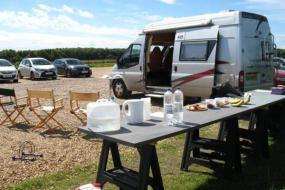 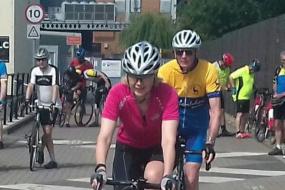 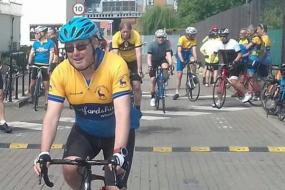 A pleasant warm day saw a large turnout of 134 riders for the club’s annual Charity Audax on Sunday 11th June. This year the club organised three rides, 50km, 100km and a 200km ride. There were a record 81 entrants for the 200km ride, 41 tackled the 100km distance while 12 undertook the 50km challenge.
The 200k “High Five”route took in the highest points in Hertfordshire, Buckinghamshire, Bedfordshire, Cambridgeshire and Essex. Local cycling clubs were well represented with strong contingents from North Road and Welwyn Wheelers. The feedback from the clubs and individual riders was very good, riders said how much they enjoyed the routes through Hertfordshire and the surrounding counties.
Volunteers from Hertfordshire Wheelers turned out in force to run the headquarters at Allenbury’s Sports and Social Club and the four control points. Family members made some delicious cakes which were much appreciated by the riders and raised over £160 in donations. The overall surplus for the day was £1,115 which will be donated to Sense , the charity which supports deafblind and people with sensory impairments.
The fastest 100k rider was back in 4 hours and 20 minutes. The fastest 200k entrant took exactly 8 hours to complete the ride. By the afternoon, a headwind had developed which proved to be an additional challenge for the High Five riders on their way home. The last High Five rider rolled in 9.35pm which was just inside the cut-off time.