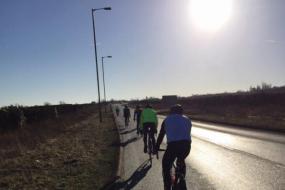 Category 3 ride led by Nathan Brede
Eight riders set off from Ware to ride to Jordan’s Mill at Langford.  Cold but sunny ride &, in places, roads a bit slippery.  Ride went via Wadesmill, Puckeridge, Wyddial, Sandon, Ashwell, Hinxworth then on to Jordan’s Mill.  Good service at the Mill.  Plenty of hills and banter on the way as the miles drifted past.  Our return route was Baldock, Weston, Walkern, Watton at Stone then back to Ware.  Altogether we did just over 60 miles; one mechanical breakdown & a Danny North puncture. A good testing ride.

Category 6 ride led by Danny Hood
As I pulled into the Allenbury’s car park, I passed a couple of balls that had been frozen off a brass monkey. This summed up the morning’s weather. Off we set towards Bishops Stortford, taking in a few more main roads than usual because of the risk of ice. On his first try out ride with us was Paul, a friend of a friend of Captain Bob. He coped with the blistering pace of the cat 6 peloton easily enough, at least until we reached Bishops Stortford!
One wheeler decided not to stop for coffee and cake and headed straight home. It's during our stop for refreshments that I make a list of the day’s riders and suddenly realised that we were not one down, but two. Where's Paul? Our guest rider had somehow vanished not knowing the name of the cafe or even whereabouts he was. Oh flip!  It was just as well that I had remembered the club's policy of handing out a card with my phone number and destination on it. (Of course I hadn't). Luckily enough, Paul had somehow managed to contact Bob, via smoke signals, Tom-tom drums or mobile phone, and we found out he was riding around trying to find us. This time as we went outside we spotted him riding past and led him to the cafe. I accepted his apology for losing us and said "Just make sure it never happens again" NOT REALLY.... it turned out he'd followed captain Bob on a short cut unbeknown to Bob and had got caught at two sets of traffic lights.
The return journey was without mishap and those who wanted to arrive back at base all got there safely. Even Paul lol.  Good company and a cold but lovely sunny day made for a great ride.