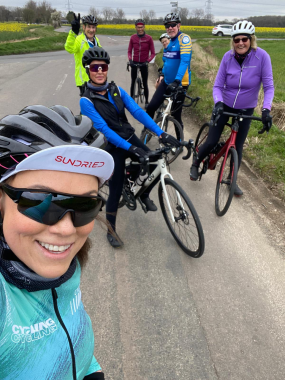 Category 6 on their way home

Having received a call from Tony on Saturday saying his poor son was ill, I happily agreed to lead the ride to Thremhall Park

Twelve riders set off promptly from Allenbury’s with two new prospective riders, Pete and Nicolette. Everyone had remembered to put their clocks back! The ride to Thremhall was very sociable and uneventful. We picked up Daniel at Much Hadham, where he was playing the role of bridge keeper

It seems that every cycle club in the area had decided to go to Thremhall and arrive at the same time. Bike after bike flooded in leaving a queue out the door and beyond. The two poor ladies worked flat out to serve us. A few Wheelers decided to abandon and move on.

But all were fed and watered eventually and, after a nice relaxing chat, we set off at a higher pace back home. Somehow one new perspective member who will remain unnamed got stuck behind a huge lorry, and was then held at the railway crossing. The rest of the gang were beginning to wonder if he is Cat 6 fit!! Only joking, Pete.

We had a lovely relaxing ride back to Ware.

Thank you Pete and Peter for helping me by staying at the back to make sure we didn’t lose anyone. And thank you everyone for a lovely ride.