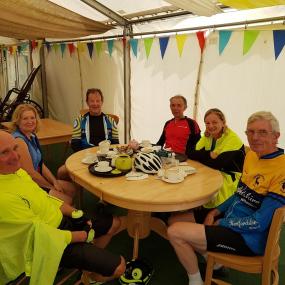 What is it with the weather forecasts lately? They are less reliable these days than a certain football team with a two goal lead. The rain more or less promised for all day, then guaranteed for about lunch time, never showed. Instead we had lovely sunshine and boil in the bag cyclists.
Seven (and a half including baby Wiggo) riders set out through the Hadhams, then through the Pelhams before hitting the Sunflower Cafe at a few minutes before eleven. No problems on the outward journey other than me failing to decide whether to go left or right as we passed through the Allenbury's gates. A near miss avoided as I finally made up my mind, and left it was.
The café staff managed to get the orders correct...... eventually! But we were served quickly, and were heading home by about a quarter to twelve.
I told the group the way I was going home, then for some reason changed my mind halfway. This meant a short blast up the main road into Puckeridge. Luckily Gareth is faster towing a trailer than the rest of us not, and we were back onto the quieter roads in about a minute.
Through Barwick Ford and onto Wareside where the group spilt.
Nice weather and nicer company.
I'm off ooop north next weekend to watch the men's world championships. Hopefully the weather will be good, so look out for the Wheelers shirt in the crowd.