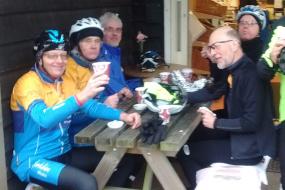 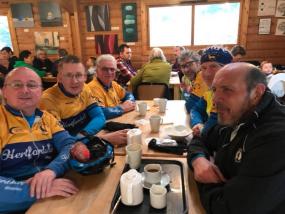 Quelle horreur!
I was mortified today to find out that I'd made a mistake when heading up last week's club ride report (*).  Not only was I castigated by Tony DosS, but he was in the right!
Then Martin had a go, suggesting that the ride might end up 0.4 of a mile short:- tantamount to treason!
A Secret Seven set off from Hertford with most not knowing the location of Shenley, let alone the cafe.  A direct route was taken as I'd done 130 miles the previous day and wasn't up to much more.  One turned back less than a mile from the cafe (but he'll get his points due to the complexities of his situation) and so we were down to being the Magnificent (half) Dozen.
The route took its toll on Martin who was having a problem with his not inconsiderable dimensions but for me this wasn't a problem as it enabled me an excuse to look as if I could keep up, something I was grateful for.  Soon we were the Famous Five that eventually became the Fantastic Four.
It was a bit undulatory, but no major hills.  Slightly chilly, but not freezing.  On occasions a chance for some to ride off the front at speed.  We got back having done 36.4 miles.  Good ride, great company and something different.
(*) I suppose the biggest surprise was to find out that people actually read these reports!

Mid January brought us a good winter cycling day, not too cold, no ice, overcast sky but no low sun and, unlike recent times, virtually no wind. A group of 5 made their way through Wareside, Much Hadham, Little Hadham, the Pelhams of Furneux, Stocking & Brent, Measden, Anstey, Cave Gate, Wyddial to Buntingford. A very full coffee shop meant our refreshments were taken 'al fresco' so we didn't linger for seconds. Return via Aspenden, Westmill, Cherry Green, Great Munden, Old Hall Green, Colliers End, Latchford, Barwick, Wareside back to Ware. 42 miles.

So the nine Cat 3 ers gathered at Allenburys in Ware, but where were they going? Even the ride leader wasn’t sure! Originally he planned a route for The Three Lakes in Clavering, but was informed that the cafe was closed for January. So he planned a route for Brett’s Farm in White Roding. However after ringing them on Friday, he was informed the cafe was closed until late January. So he thought he’d be clever and use the same route and stop at Hatfield Heath Tea Room.
The nine set off on a clockwise circular route taking in Much Hadham, Bishops Stortford, Hatfield Heath and returning via Southern Harlow. Unfortunately upon arrival the tea room was “ram jammed” full of cyclists (no room at the inn). So Barry had an idea, “There’s a cafe at Cammas Hall Fruit Farm” he said, "I’ll Lead the way!" So off we trundled! Guess what, it was closed! So we picked up our route home and cycled past Brett’s Farm, guess what! They had a Deli Shop which is where we refuelled with teas, coffees and sausage rolls, sitting on the outside patio. Very nice too, and thankfully it wasn’t as cold as of late! Photography courteous of Graham K. All’s well that ends well!