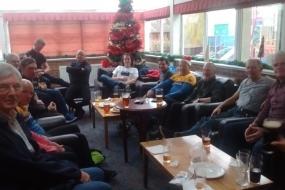 Seven intrepid adventurers turned up for the pre-Christmas ride. Danny couldn’t make it, because he was a little worse for wear after a session at home the night before. The 3’s said they may as well come with us, then upon realising we were going to do a mammoth 25 miles, they bottled it and went on to do 45. Shame on you! I would just like to welcome Andy Lewis to “our world”; he must have thought we are a bunch of unorganised cyclists, it’s not usually like this, Andy, honest guv. We rode off up to the Hadhams and then I realised my route was going to be longer than I expected. Luckily Captain Bob rescued me and showed me a quicker route to Café Mocha. Mike had to say his goodbyes as he had a gathering at home. Martin did his usual and punched onwards until the hills, where we caught him up. Along the route, there were plenty of Christmas jokes from Simon, who really should be banned from telling the as they were the worst ones I’ve ever heard, apart from mine!

Cafe Mocha, as usual, had lovely food and the service was good. We set off back to Ware, this time with me handing over “Air Force One” to Janine, who took us back to Ware. We said our goodbyes yes to Andy who turned off to go home. All in all a lovely ride and the weather turned out quite nice. Not a single mechanical or puncture. Oh, and I didn’t lose a single cyclist! Have a lovely Christmas, one and all. Love and kisses, Tony.

During Saturday the weather gods forecast for Sunday looked fairly grim but on the day it was only heavy drizzle to start with and then clearing up to a generally damp but usable day. Four Wheelers plus one guest assembled at Hertford for our once or twice a year ride along the old rail lines of Hertfordshire, now known as the Cole Green Way and the Alban Way, with a devious combination of cycle routes and back streets to get us through WGC and Hatfield. Tea stop at Inn on the Park in Verulamium Park, where fortunately they don't seem to mind customers with muddy feet and even muddier jackets. Return via the same route. The Cole Green Way is due to have its surface upgraded at some future point but for the present it is covered in watery mud, most of which seem to end up on those riders without proper mudguards or indeed any mudguards at all! Distance of 34 miles, fortunately no punctures, mechanicals or tumbles.

The 3's, 5's & 6's all met at Ware where Tony tried to convince all and sundry to join his ride just in order to make his numbers look good.  The 3's capitulated quickly but I was made of sterner stuff (or just lack the moral fibre to change tack) and decided to press on by myself on the Cat 5.  Some delays at the start enabled the late arriving Lee to join me, although I think he was sorely tempted to accompany the 6's.  We set off and about a mile later were joined by Gareth who had found it difficult to maintain the pace set by the others.  Several hills later we got to our destination and then set about a direct route back to the beers at a speed that suited the individual, not the group, - so we didn't see Gareth again.  We returned and at least two of the 3's said that they wished they had come with me as I had done 45 miles compared to their quickie (obviously they wanted the longer journey, not to be with me).  It was a bit wet on the outward bound trip but it didn't rain on the return although we still remained wet.  When we got back there was a sizeable crew knocking 'em back, most of whom had the foresight to be wearing a change of clothing.  I hadn't thought of that!